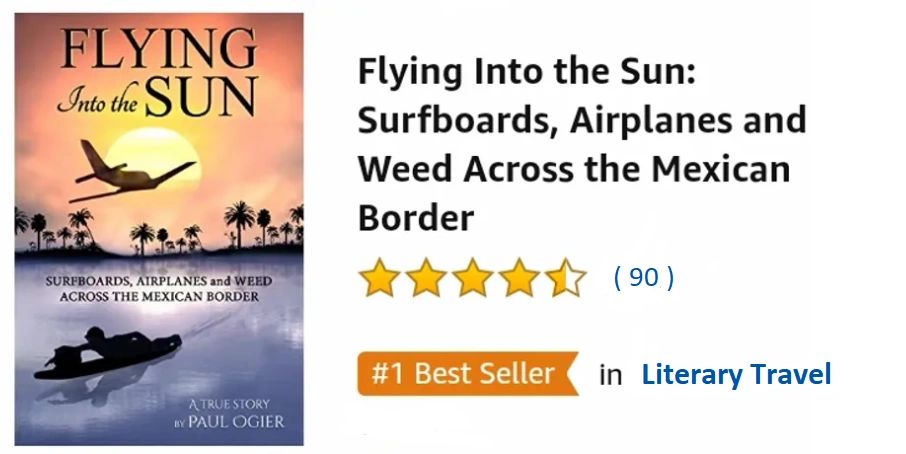 Flying Into the Sun - The Book

Journey  back through the culture of the 1970s in Mexico and the U.S. as a young  surfer befriends indigenous Zapotecs, smuggles weed across the Rio  Grande, encounters law enforcement on both sides of the border, and  learns to fly.

In  1979, a Mexican army truck and a small U.S.-registered airplane race  toward each other on a remote airstrip in southern Mexico. Their game of  chicken marks the end of a young surfer’s true-life smuggling odyssey  involving midnight powwows with indigenous Zapotecs of Oaxaca, paddling  kilos of marijuana across the Rio Grande on surfboards, learning to fly,  and a stint in the Oaxaca State Penitentiary.

Narrated  by the main character, Flying Into the Sun is not just a true-crime  adventure memoir. It is an introspective, coming-of-age tale that weaves  through a secret Mexico and chronicles the fast-changing 1970s in the  U.S. with its emergent culture of long hair and drugs, rebellious youth  versus hostile law enforcement, and the music and pop themes of the  times. The author worked his way up through general aviation to become a  pilot for American Airlines, where he flew twenty years and retired as  captain. Previous literary endeavors include publishing the  insubordinate aviation tabloid Houston Air News, as well as writing  stories for national and regional publications such as General Aviation  News, the Portsmouth Herald and the Texas Flyer.

PRAISE FOR FLYING INTO THE SUN

"On  a dark desert highway, cool wind in my hair; Warm smell of colitas,   rising up through the air . . . . Oh, the good ol' days of red-haired   Mexican pot in the 70s. Paul Ogier tells an engaging and entertaining   story about his youthful misadventures as a drug runner at a time when   people were discovering the joys of marijuana. Not only is "Flying Into   The sun" well written, but there is a quiet wit about it that had me   laughing out loud at several sections. As a coming of age story, this  is  certainly one of the best. It's insightful and has its touching   moments. The ending left me both sad and uplifted that the main   character had finally reached a level of maturity that set him on   another path to his dreams. But the next time I fly, I will be  wondering  what youthful indiscretions the captain had committed!"
~Patricia Griffon, Author of "Blind Reason"

"Yup,  I love books. And I'm always happy to find out about a  surf/travel  book that takes me back to places I've been to, or back to a  time I've  missed. Flying into the Sun is a mix of both...a time before  smartphone  navigation in rental cars or even planes, and what more a  surfboard  can be used for than just riding waves...
Worth a read."
~thefreesurfer.com

"This is fantastic!! It's going to be BIG! I see a movie!"
~Chris Cantara, pilot & owner of Seaside Aviation, LLC

"I  began Flying Into the Sun with my pilot's cap on, expecting a  tale of  youthful bounds-pushing and flying anecdotes. Well, by page two I   realized a lot more than bounds-pushing was unfolding, and the flying I   expected was turning into chemically-enhanced and Mexican-grown flying   of the kind best enjoyed by a campfire on a secluded beach. By the   story's halfway point, I was as deep into the marijuana, hash, and coke   world of smugglers and risk-takers as I'd ever been, and loving every   moment of Paul Ogier's narrow escapes. Until escape was no longer an   option.

If you are a pilot, you will find yourself back in the cockpit   on your first solo cross country...you know, the one you screwed up but   managed to survive? In Ogier's case, managing to survive airborne and   car-borne cross countries was both physically and financially dicey.  The  author's knowledgeable weaving of songs of the 70s (with a backhand  to disco) to add color and texture to Flying Into the Sun is simply   brilliant. But this is not a book about flying or music or even  youthful  risk-taking and consequences.This is a timeless story of an  insatiable  appetite that drives some elements of virtually all  societies to create  markets and methods to feed that often-deadly  hunger."
~Jim Moore

"If  you spent anytime in Mexico in the 60's and 70's you will  appreciate  this read as a coming of age story. Mexico was a surfers paradise, the  sweet unspoiled Mexican frontier was made for youth and  adventure. Paul  does a good job of showing how one matured from a surf  bum to the left  seat for a major airline. Understanding where you've been helps know  where you want to go...especially if it's a Mexican  prison. Yeah, it's  that good."
~Jonathon Blair

Brett McMillan   Enjoyed reading the book, especially the trips through Mexico. Took a  lot of balls, risk to do that back then. Interesting in a historical  perspective in that it’s mostly legal now. Glad to see your success  later in life as a retired Captain.

Terry Hayes   Truly enjoyed the book, thank you, it was a great read!! We are the  same generation and it was definitely a great time with more adventure  back then. Loved your descriptions of Houston, have lived in Cypress  since 1989. I yearn for the days where you describe flying from West  Houston and Weiser and up Barker Cypress....back then it was a two-lane  road with prairie on both sides once you got north of 529. Today it's a  median divided thoroughfare. Any plans to write another book?

Dwight Rathmell   It's a good read, I have driven through many of the same places in this book in a VW bus.

Michael Woodrum   Just finished it, as a 68 year older, it took me back to my  misbegotten youth!! Those were great days, sure miss those times!! 😎😎

Phillip Young   Great read. From back in the day when you could cruise all over  Mexico safely. If you had a VW, you could break down in the middle of  nowhere and get parts or help because VWs were everywhere.

G Bruce Eskildsen   Such a good book really enjoying it. I was doing a lot of flying in  those days crop dusting. Lots of things happening. Country Roads take me  back and I would even enjoy more the second time!

Charley McCrone   Read the whole book on the way from Anchorage to Honolulu! We have some things besides music in common. Fascinating story!

Jeff Anderson   Good  book! I remember when the rainbow (well kinda 😁) hit the scene, the  price of weed went up, but it was good smoke! Those were the days, road  trips to Houston, Port Arthur, Galveston, bring back the mean green!!  Miss those days

Glen Lockaby   We call him The Tree Top Flyer…

Rudy Escamilla   Look forward to reading your book. Grew up in Corpus Christi, Tx and  surfed Padre Island in the early 70’s. Great memories of catching waves  at St Joe’s (Port Aransas). Thankful to this day that surfing was a big  part of my life then. Oh yeah, weed was also plentiful up and down the  beach soon after a tropical storm/hurricane had passed through.

Randy Ivie   Just got through reading it. Great book. Once I started it I couldn’t put it down.

Timmy Wright    Couldn't put it down! I believe it was a very accurate account of  the adventures and struggles the author and his accomplices went through  during this period in his life. Large print, easy bedtime reading  without a bunch of big words that no one really uses or understands that  most authors throw in today to sound smarter than they really are. I  can't wait to pass this on to my surfer buddy that I travel to Mexico  with, as it is gonna remind him of some of our South of the Border  escapades, minus the drug smuggling. Thanks again for your amazing book.

Jesse Houle   In Search of Captain Zero on mushrooms ...

Terry Stewart   One of the best books I've read recently.

Kenny Lynch   I have read many books about heroes and crooks, and this is one that  when you start you will not want to put it down. A well written book.

Any Questions about Flying Into the Sun?

Copyright © 2020 Flying Into the Sun - All Rights Reserved.